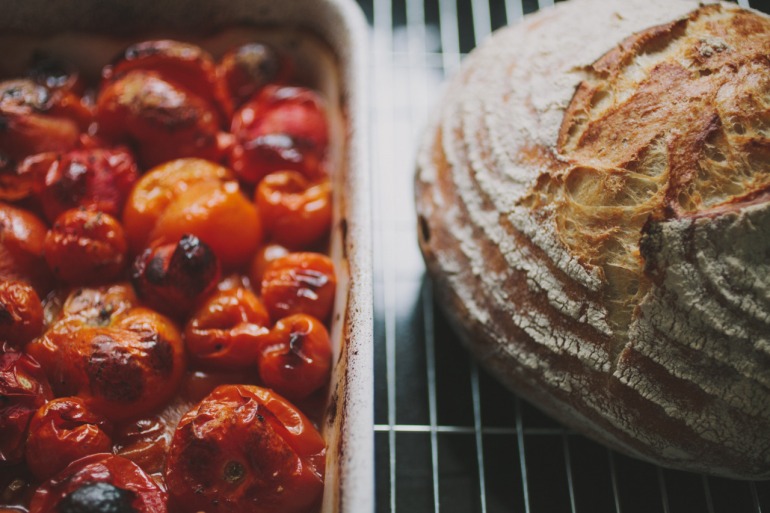 We’ve been having some seriously crazy weather lately. We’ve had a mix of glorious sunshine, hailstones the size of golf balls and then rain that sheets down in an apocalyptic fashion. These things combined have made me long for comforting, stodgy food like big pies and mashed potato, which is ok every once in a while, but probably not on a daily basis. Instead, I’m making a conscious effort to opt for recipes that are satisfying and comforting, but light, healthy and versatile as well.

This recipe is adapted from the brilliant book Bröd och pizza by Swedish baking genius Martin Johansson – I really can’t sing his praises high enough. I picked up the book up in Stockholm in a shop called Design Torget on a trip a couple of years ago and instantly sat down to devour the beautiful photography and recipes. This one being a belter, with quite a delicate and not-overly sour flavour, hence the name ‘light sourdough bread’.

The recipe actually makes two loaves, which is more economical and will also make you popular with your friends, or in my case in-laws. If, however, you don’t feel like sharing then it does freeze really well too. You can see the distinction in the two loves that I baked, as one I proofed in a traditional cane banneton and the other in a cloth lined bowl. To be perfectly honest, the flavour is not impaired at all by using just a regular bowl, lined with a tea towel, so I’d recommend trying that first before investing in a banneton as they can be expensive.

Scoop into a bowl between 50-60g of sourdough starter. If you’ve been following along with my sourdough starter posts, then this probably constitutes all that you’ve made, which is ok, because we’ll reserve some for future baking projects later. Mix in 150ml of water and 150g of flour and leave to sit, covered with a tea towel for between 7-12 hours – overnight is fine, so I usually complete this step just before I go to bed.

In the morning, you should be greeted with a frothy, bubbling, happy culture. Remember to reserve one tablespoons worth of the culture at this stage, as this will be your starter going forward. To the rest of the mixture, add 550ml of water first, and use your hand to break down the culture, sloshing everything around and making sure that it’s all away from the sides of the bowl. Then add the remaining 850g flour and give it a quick rough mix, before covering the bowl and leaving for about 45 minutes to stand.

After 45 minutes, check back on your dough and give it what’s known as a ‘turn in the bowl’. Sprinkle over the salt, and wet your hand before patting it into the mixture. Gently take a portion of the dough from the edge and stretch it upwards as far as possible. Tuck the dough back on the opposite side of the bowl, stretching it over the middle as you do so. Do this at least 4 or 5 times, so that you have taken dough from each side of the bowl. Cover and leave to stand for another 45 minutes.

After another 45 minutes, complete another set of turns in the bowl. By this time, you should notice that your dough is becoming quite puffy with air bubbles, so do be gentle as to not knock any air out. Cover and leave again for about an hour.

After an hour, or thereabouts, scoop the dough out onto a floured work surface and use a scraper (or knife) to divide it into two roughly equal portions. Prepare either a banneton by sprinkling it with a dusting of flour, or using a mixing bowl, lining it with a tea-towel, and giving that a coating of flour.

Shape the bread by encouraging the dough into a roughly rectangular shape. As if folding a letter into 3 parts, bring the top edge to two-thirds of the way down the middle, and then fold the bottom edge up to cover it. Turn the log of dough 45 degrees so that it’s now a long shape facing you, and repeat the folding into three until you have a roughly square/round shape. Place this into the prepared bowl/banneton seam-side up and cover it again.

The dough can then sit at room temperature from around 3-6 hours, or be placed into the fridge to proof overnight.

When ready to bake, as with my magnificent no knead Dutch-oven bread, place a large lidded casserole dish – I use a Le Creuset cast iron one – in the oven to preheat at 220 degrees centigrade. When the oven is up to temperature, take the dish out and upturn the banneton to deposit the dough. Use a sharp knife to cut a slash in the top, before covering with the lid and returning to the oven to bake for approximately 30 minutes.

After 30 minutes, take the lid off the casserole dish and let the bread cook for an additional 15-20 minutes depending on how dark you like your crust.

Take the bread out of the casserole dish and leave it to cool on a wire rack before cutting.

To accompany my bread, I made my colourful roasted tomato soup, which I was able to cook at the same time as the loaf.