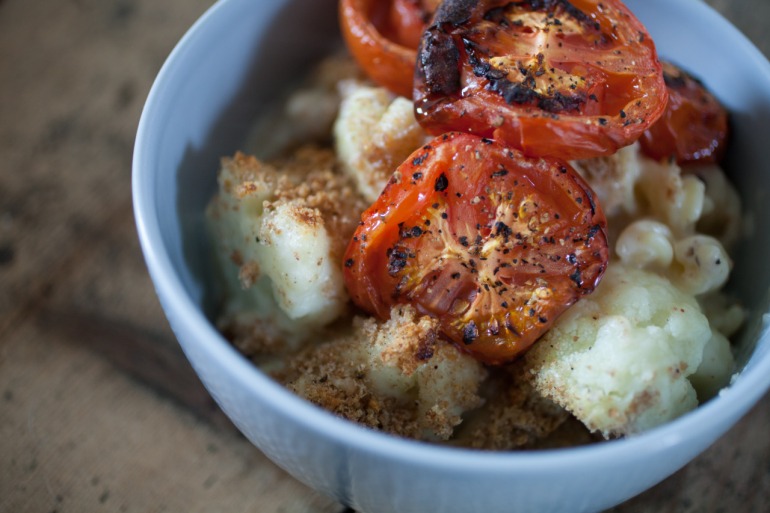 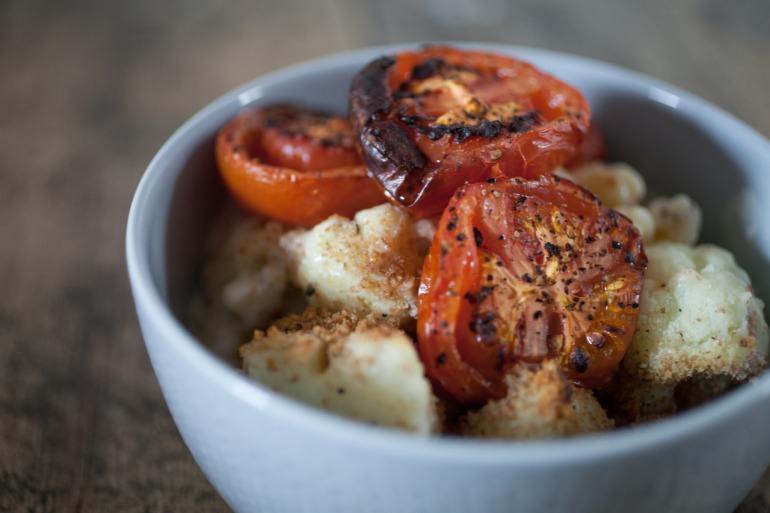 Something that I’ve been wanting to kick off for ages is a project to encourage using up left-overs. I really hate waste. I’m the sort of person that will eat everything on their plate – even if I know I’m full, just because I don’t want to put anything in the bin. In particular I want to talk about bread, because I think often, after the loaf has been enjoyed, the sad crusts have a tendency to end up in the bin, which is just silly when they could go on to be part of a really delicious dinner.

This makes a super quick mid-week meal. It’s a sort of cauliflower cheese/mac and cheese amalgamation, because you know, I’m a vegetarian, so if I spot an opportunity to cram some veggies in there – I will do it. Crowned it with a cheesy wholemeal breadcrumb crust, it’s easy to make, rewardingly tasty and comes together with a few bits that you’ve probably already got lurking about in the cupboard and fridge.

Heat the oven to 200 degrees centigrade. Slice the beef tomatoes across the middle, before oiling, seasoning and roasting them cut side up in the oven.

Either using a blender or a sharp knife, chop the stale bread until it resembles breadcrumbs. I used a blender, and pulsed the bread with the 1/3 of the cheese and a little salt and pepper.

On the hob melt the knob of butter and stir in the tablespoon of flour to make a thick paste. Gradually add the milk, whisking to stir out any lumps. Add the nutmeg and 2/3 of the cheese and stir until the cheese has melted and the sauce thickens.

Combine the cheese sauce with the pasta and cauliflower, and spoon the mixture into a large roasting dish. Cover generously with the breadcrumbs and then put the dish into the pre-heated oven, along side the tomatoes, for approximately 25-30 minutes.

Serve with the tomatoes.

The bowl used here is Sarjaton pattern by Iittala in pearl grey.