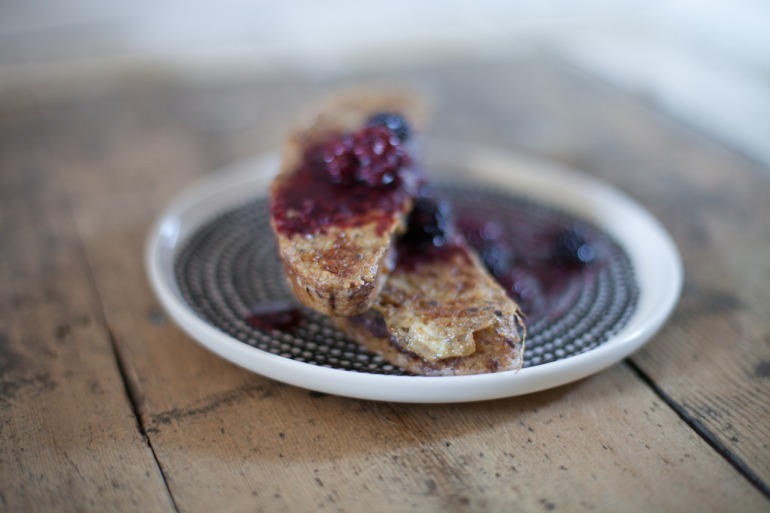 I feel like, thus far, breakfast is a much neglected area on this blog, which is ironic as it’s one of my favourite meals. So without further ado, let me address the issue and introduce you to the wonder that is Finnish toast. Originally this was something that I discovered not in Finland, but in London, at a café in Hackney called Dreyfus. If you’re in the area I really recommend it as a nice spot for good eats and watching the world pass by. Anything with cardamom will immediately spike my interest, so naturally I had to try it.

In contrast to French toast, which is usually covered in maple syrup and cinnamon sugar (no bad thing) this recipe is more like eggy bread, which my parents used to make on camping trips and conjures up lots of warm and fuzzy memories for me. It’s not sweet, bar the lightly cooked fruit that you dollop on top prior to serving, and it’s oh so filling, which makes it the best kind of breakfast, as you don’t have to worry about being hungry again for a good few hours. The fact that it’s quite savoury means that you don’t get a sugar crash as well as making it almost a sensible grown up breakfast option.

Whisk together the eggs, splash of milk (as much as you’d put in your average cuppa) and spices. Pour this mixture into a roomy shallow dish or onto a plate and lay down the slices of bread, leaving them to absorb some egg, before turning them over and coating the other side. If you wanted to be really lazy/shrewd, you could do this stage before bed, tuck it away in an airtight container, and then cook the toast when you get up in the morning.

In the meantime, in a small pan over a low heat cook the berries with a teaspoon of honey until they start to fall apart. I used frozen raspberries and blackberries that I had left over from the autumn, but you could really use anything you wanted. Keep it over a low heat while you cook the toast.

Heat a frying pan until medium-hot and then add in a nut sized portion of butter. Let it melt fully and then place the slices of bread in carefully and cook them for a couple of minutes on each side, until golden.

Serve straight away with a generous splodge of the cooked berries.